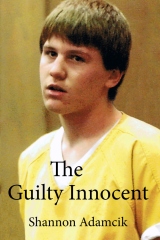 This is a true story and no one can tell it better than the people who lived it. A crime reporter can look at the details of a case, but they cannot tell you how it feels to live through it. I can and I did. I used the pre-trial and trial transcripts, copies of the police reports, the autopsy and DNA reports, and DVD recordings of all of the evidence in the case. I’ve done copious research. But more importantly, I take readers step-by-step through what it feels like when your 16-year-old son is accused of first-degree murder; all the odds are stacked against him; and his defense is in the hands of attorneys you can’t fully trust to come through for you.

Sixteen-year-old Cassie Jo Stoddard agreed to house sit for relatives on the weekend of September 22, 2006. It was something the teenager had done before…but this time something went terribly wrong. When the family returned home at the end of the weekend they found Cassie lying on their living room floor brutally stabbed to death.
Detectives focused on two of Cassie’s classmates who had briefly visited her on the night that she was murdered: Torey Adamcik and Brian Draper. Initially both boys denied any knowledge of the crime, but after two separate interrogations, Brian Draper told detectives a chilling story of murder straight out of a horror movie. The two boys were immediately arrested, and a shocking videotape was discovered that seemed to depict the two teens not only planning the cold-blooded murder, but celebrating it.

Community outrage was strong and immediate. The public demanded justice. But was the video actually what it appeared to be: a cold-blooded documentary that detailed the plotting of Cassie’s murder; or something else entirely? Could anyone uncover the truth in time and convince a jury that sometimes things aren’t always what they appear to be?
The Guilty Innocent is narrated by Shannon Adamcik, mother of Torey, one of the accused boys. It takes readers behind the scenes of a trial where prosecutors cared more about public opinion than truth, defense attorneys, who had never argued a murder case, were in over their heads, and a young boy’s life hung in the balance.